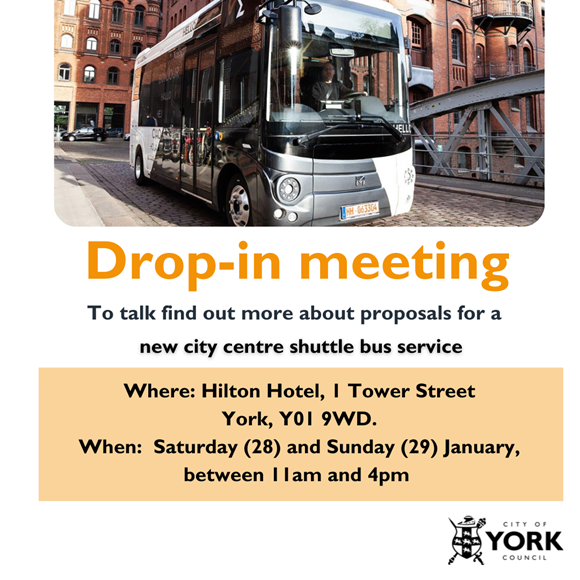 Residents and visitors are encouraged to join City of York Council at a drop-in event to find out more about proposals for a new city centre shuttle bus service.

The event takes place during the York Residents’ Festival weekend, on Saturday 28th and Sunday 29th January, between 11am and 4pm at the Hilton Hotel, 1 Tower Street, York, Y01 9WD.

During the event, officers will be on hand to talk through the bus shuttle service proposals, including the possible routes and the types of vehicles which could be used.

It is hoped that some of the buses which could be used for the shuttle service, in both footstreets and the wider highway network, will be available to view during the exhibition days.

The proposal to introduce a shuttle service was initially identified in the York City Centre Active Travel Access Study (October 2021).

The report outlined the impacts of removing the footstreets exemption that had allowed Blue Badge holders access to footstreets.

It also suggested the council should explore options for a city centre bus shuttle service, alongside the other measures such as benches, changes to pavement café licences etc which are being progressed already.

The council has explored some of the shuttle bus options and this exhibition provides an overview of them.

There are many potential options for a bus shuttle route through the footstreets of York. The aims that were considered when drawing up these options were:

Anyone unable to attend the drop-in session will also be able to complete the consultation and provide feedback via www.york.gov.uk/consultations