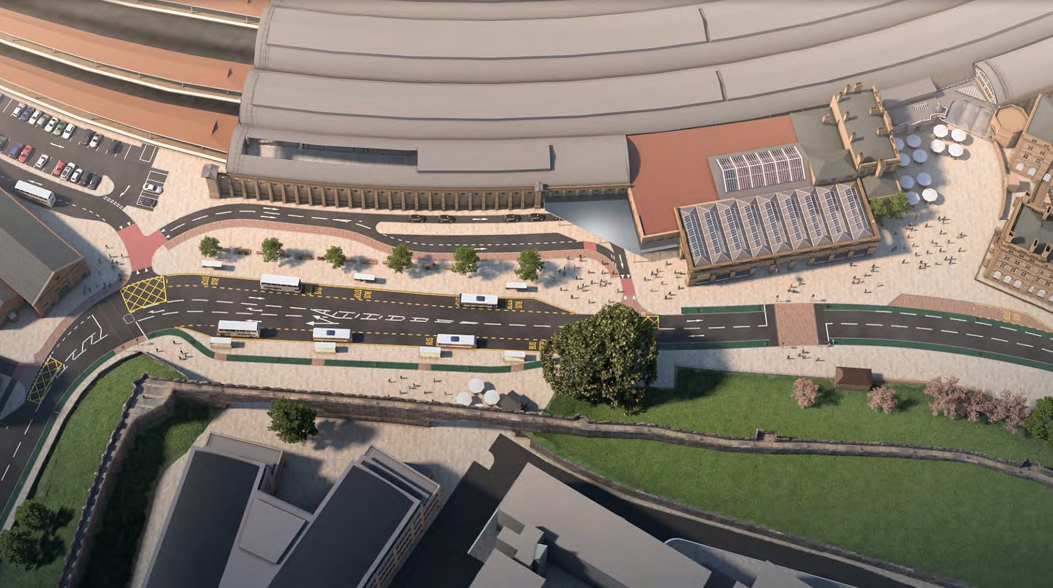 Work can begin this autumn to create a fitting gateway to York after plans to transform the railway station entrance were approved by planning committee yesterday (Thursday 4 February).

The plans to modernise the access to the station include removing Queen Street bridge, which hasn’t been needed since trains stopped passing under it in the 1960s. Removing the bridge will create space for vastly improved access for all modes of transport while revealing hidden sections of the city’s historic walls.

The scheme has been developed by the Council in partnership with the West Yorkshire Combined Authority, Network Rail and LNER.

The plans will change and improve the entrance to the railway station in order to:

“I am delighted we’ve reached this milestone. The Railway Station shaped the York we know today, and will play just as significant a role in delivering the sustainable, connected city we need to be in the future. The challenges posed by the pandemic have reinforced the need for us to be on the front foot with our key regeneration schemes, including the station front and York Central.

“The station front upgrade will not only provide a much needed modernisation of the station and surrounding area, but it is also an integral part of the wider York Central scheme, which will look to drive clean and inclusive growth in the city for generations to come.

“Partnership working has been central to the scheme, with the Council working together with the West Yorkshire Combined Authority, Network Rail and LNER to bring this ambitious project to life. This new design and layout will ensure it is a fitting gateway to our fantastic city.”

“York station has welcomed visitors and business to the city since 1877. We’ve worked hard to develop a design which will transforms the ‘Station Gateway’ arrival experience, enhance the setting of our city walls and encourage sustainable and active travel to and from the station, including the opening up a new route into the centre underneath the city walls.

"The scheme complements the proposals being progressed for the west side of the station significantly improving access and directly supporting delivery of housing and commercial uses on the York Central site."

“We’re delighted to be working in partnership with City of York Council, Network Rail and LNER on this important scheme, which will make it  easier to travel on foot, by bike and by public transport, connecting more people to jobs, training and education opportunities.

“Our region deserves a transport system which fills people with pride, with optimism and, above all, with the confidence that we have a clear direction of travel towards future prosperity for all, while helping us achieve our aim of becoming a net zero carbon economy by 2038.”

“York railway station is truly iconic, and this scheme will help to make sure the station itself, as well as the surrounding area, remains fit for purpose for generations to come.

“We’re working closely with York Council, LNER and other partners on the project, and we look forward to residents, visitors and station users reaping the benefits.”

“We are pleased that plans to improve the area to the front of York station have been approved. The changes will complement the improvements LNER is already making to the inside of the station, ensuring that all visitors and customers have a special, warm welcome as they arrive in the city.”

The scheme is also being delivered with money from the Leeds City Region Transforming Cities Fund, which is aimed at providing a viable alternative to car journeys.